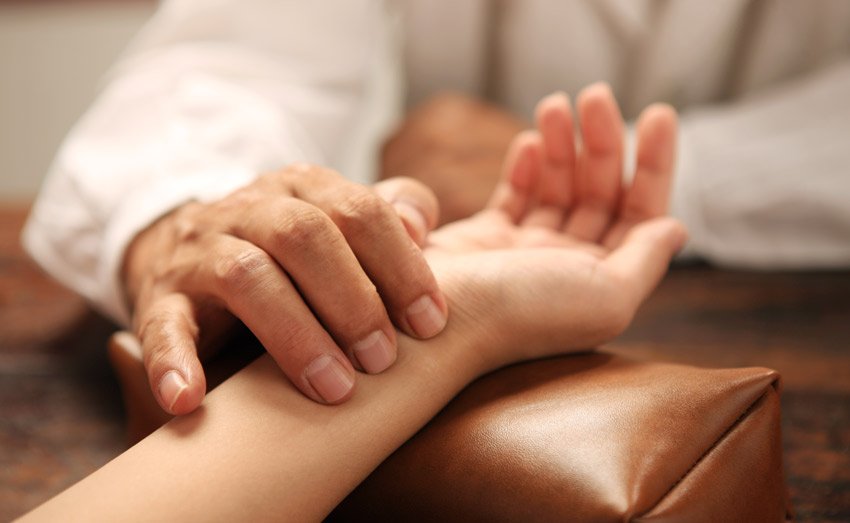 We have all had our pulses checked at a physical in a doctor’s office. They check your beats against a clock to make sure the beats are consistent and the pulse is not beating too fast or slow. That is generally all there is to it.

However, the radial artery in your wrist can actually give an amazingly detailed description of what is going on inside the human body; so much so that Chinese physicians have used it as their most renowned technique for diagnosis for centuries.

I would even go so far as to say that pulse diagnosis is the foundation on which all Chinese Medicine theory is based on, and is the fundamental reason why ignoring Chinese Medicine as a physiologically based medicine is a huge mistake.

Much like how a stethoscope can give detailed information about the heart, lungs, and digestive movement through sound waves, the pulse can give tactile information on the strength and health of blood flow through the whole body, and like auscultation (the act of listening to your internal organs, typically using a stethoscope), pulse taking is a learnable skill that can be passed on.

The school of thought that gave us the Yellow Emperor’s Canon of Internal Medicine used dissection to understand the human body, but at that time there were no imaging techniques to know what was going on inside of a living body.

Chinese Medicine has countless volumes of texts on pathologies of organs and pattern diagnoses based on internal medicine, so how did they come to these conclusions? The radial pulse. A segment from the wrist crease to about 4 inches up the arm can give great detail on what is happening on the inside of the body if you don’t happen to have an MRI machine handy.

It must have taken generations of physicians constantly feeling the pulses of all their sick patients and looking for correlations. Not only the strength or speed of the pulse, but the diameter, hardness or flaccidity, tactile quality, amplitude, and placement in the canal all give information about what is going on inside the body.

For example, a pounding pulse where the pulse expands and forces your finger upwards under its amplitude is indicative of extreme inflammation and possible infection. Today a physician may recognize it as a sign of high blood pressure, however, as several factors can contribute to high blood pressure a pulse like this one is specifically treated using acupuncture and herbs that reduce inflammation out of the system to stop causing a heat driven expansion in the vessels.

As time passed it must have also been noticed that people who complain of the same symptom will have a problem with their pulse in the same segment. For example, the sinuses can be felt on the right arm on the segment closest to the wrist crease.

Here if the pulse feels like mush under your finger there is definitely congestion or trauma from a head injury. This understanding was applied to each segment as it correlates to each region of the body. From this understanding one can distinguish how the blood is flowing through the various organs and soft tissues of the back and joints, and from that be able to diagnose a pattern of dysfunction that is leading to various symptoms or complaints.

Pulse diagnosis has become the foundation of my clinic as I find it to be the most useful technique in diagnosis and treatment planning. Of course in Chinese medicine you can ask a litany of questions about a patient’s health, listen or palpate the abdomen, and even look at the tongue to take note of abnormal coloring or coating to come to a conclusion as to what is going on with the patient.

However, the pulse is a far more accurate and quicker assessment. This is why I use it at community events to meet new patients and prove that the pulse can tell me their problems as I’ve never met them before. This bridges confidence that I can actually help them with their ailments and give them real answers as to how their symptoms fit perfectly in Chinese pattern diagnosis.

This leads to the complicated mystery of why a vast majority of people have never heard of pulse diagnosis before. If it is such a great tool why is it dismissed by the medical community and has no avid teachers promoting its usage? The answer is a fraught history where the technique was almost lost completely.

The pulse was first written about as an important diagnostic tool in China’s first renowned physician Zhang Zhong Jing’s (jah’ng jo’ng gee-ing) work the Discussion on Cold Damages (200ce). This work has lasted until today as the first major herbal formula and manual of clinical patterns.

In the work, he clearly specifies conditions to correlating pulses felt in the arm. A hundred years later Wang Shuhe (wong shoo-huh) wrote The Pulse Classic (300ce) that discussed the 27 variations on the pulse that practitioners reported and how they correlated to clinical practice.

This manual also has survived into today and has influenced physicians for centuries. However, as China became one of the centers of the world during the Tang Dynasty (618-907ce) and moved towards a centralized bureaucracy the practice of medicine became a trade similar to martial arts schools to teach fighting techniques to the children of military and noble families.

For the next millennium most of the best physicians in China would become affiliated with these family run schools who served the emperor directly. These families and the physicians who served in the Medical Bureau of the Emperor’s Palace continually advanced and wrote about medical theory, acupuncture, and herbs. However, their techniques could only be accessed by those who were literate and accepted members of the school/bureau.

This was to ensure the social standing of the physicians and their families but did not promote the kind of co-operative approach we expect in the information era of today.

The medical libraries and family lineages maintained until the end of the 19th Century when the collapse of the Imperial Chinese system was imminent. Without a push to modernize and the collapse of China to foreign powers through the 19th and early 20th century the medicine was written down in texts, but the skills of a pulse physician were literally in the hands of the few who knew how to utilize the skill.

During the communist rise in China many of the nation’s greatest minds fled the mainland for Taiwan. Although Chinese Medicine happened to be preserved by Mao Zedong, a great deal of its techniques had moved to Taiwan with the fleeing nationalists. There, the descendants of these lineages remain and are caught in the political war of teaching Chinese Medicine that is dominated by the mainland as the access point to the medicine from the west.

During my time in China and throughout my studies in the US I have only seen two people who have really proven to use pulse diagnosis in a way that makes me believe it was the skill on which the entire medical theory was based.

The first being Dr. Jimmy Chang who immigrated to California from Taiwan. Dr. Chang tells the story that he was working as an herbalist in a Chinese Medicine hospital in Taipei when he noticed one of the doctors on staff was moving his fingers differently on all his patient’s wrists. Dr. Chang had surmised (as I have) that most physicians were taking the pulse out of ritual or clinical theater (similarly most physicians nowadays can barely use a stethoscope compared to their predecessors) but in this instance he found someone who really knew what they were doing.

Eventually Dr. Chang forced the doctor to reveal his secrets to him but decided to take it one step further. All of the explanations came in the form of old Chinese Medicine metaphors and imagery. Dr. Chang decided to apply the pattern diagnoses of Chinese Medicine and the corresponding pulses with western medical conditions.

Working in a hospital Dr. Chang became diligent of checking the pulses of patients in each ward and comparing the old terminology with the new. Dr. Chang tells it that when he eventually opened his own practice that they would stop taking calls after a certain point in the morning because the phone would ring until they left it off the hook.

His success allowed him to leave Taiwan for a more comfortable life in Southern California where he still resides. He is in his late 80s now and still teaches webinars from time to time but is mostly retired.

Although I have watched most of his webinars and read his book many times, I actually learned pulse diagnosis hands on from his student Robert Doane. Bob Doane was studying Chinese Medicine in Southern California at the same time as Dr. Chang was practicing some 20+ years ago. He learned the techniques from Dr. Chang and similarly opened his own practice outside of Seattle in Poulsbo, Washington where he now runs one of the largest Chinese Medicine clinics in the US.

Bob has done us a great service by teaching the pulse more logically to the new students and has further contributed to the field by creating an entire understanding of various cardiovascular diseases that can be felt in the pulse.

I find it to be an act of extreme luck that one person decided to teach a student a technique that was almost lost during the communist revolution of China.

This student would go on to bring this work to the US where my patients and I would reap the benefits and get to spend the rest of my clinical career improving it further.

Stay tuned next week as we get into the treatment portion of this blog series and I explain how acupuncture really works.