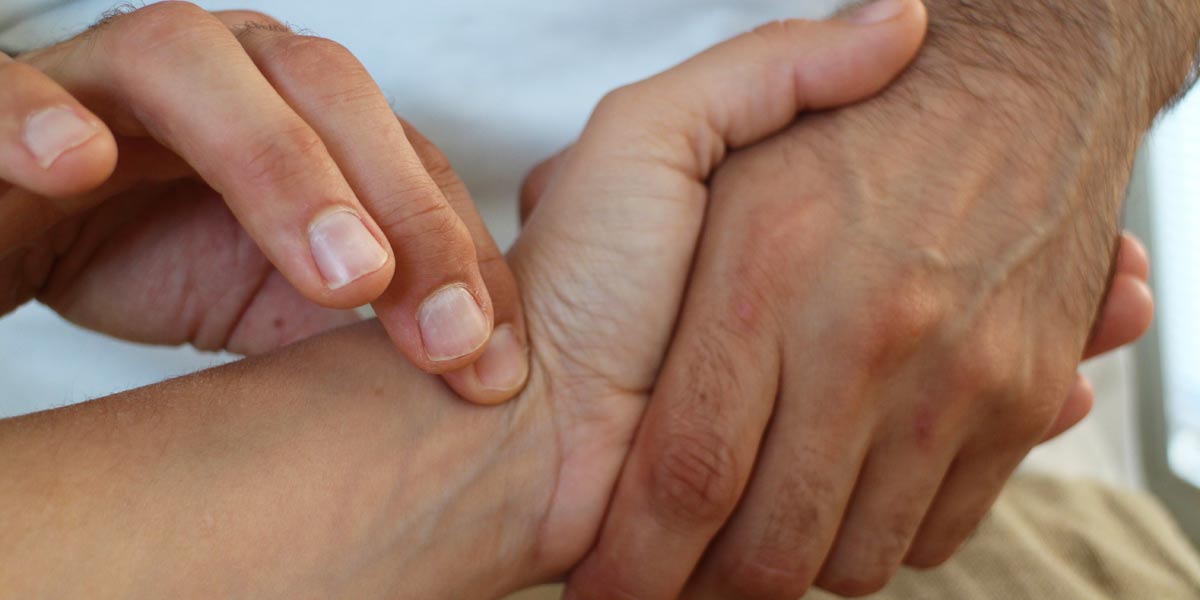 One of the major components of Chinese Medicine is a diagnostic method called pulse diagnosis, where a practitioner places their fingers on the radial artery below the wrist crease to determine the overall health conditions of the body.

Each position correlates to a different area of the body and depending on the speed, strength, amplitude, diameter, and overall quality of the pulse, a lot can be revealed about what is going on in a specific region of the body.

For example, the region of the pulse that correlates with sinuses, if it is deep, squishy, and pounding I can tell the patient they have very inflamed and congested sinuses without ever getting information from them. (if the pulse is easy to palpate, rounded, and soft I could tell the sinuses were healthy). The pulse gives a great deal of information and guides my herbal treatments by providing me the most relevant information in order to be sure that the correct herbs are applied.

In this instance I would know simple decongestant herbs would not be enough, a larger portion of the formula would have to include anti-inflammatory and swelling reducing herbs to change the environment of the sinus to stop producing so much mucus.

Pulse diagnosis was first mentioned in the original Chinese Medicine text the Huang Di Nei Jing, and subsequent manuals afterwards. Clearly it was so important many Chinese physicians obsessed over the practice and would take the pulses of tens of thousands of people in order to differentiate what conditions correlated with what pulses.

From early imperial China up until the 20th Century autopsy was forbidden as it was disrespectful to the dead. Obviously, microscopes and MRI machines would not be invented until millennia later, so the Chinese honed a skill that gave information on what was happening on the inside of the body.

Questioning, inspection, and placing an ear to the chest or abdomen was of course also used like a doctor uses a stethoscope today to listen to the lungs, heart, and bowel movement, however, the radial pulse was the most consistent non-invasive medium that had concise information on how to pursue treatment.

In the 3rd century Wang Shu-he wrote the first text exclusively on taking a pulse known as The Pulse Classic. From this point on the tradition was continued and improved upon for centuries, guiding the argument physicians would have on what was the best methodology in practice for different diseases.

However, it is interesting to note that just because a physician may have been famous in China does not mean they mastered the ability to read a pulse. Pulse diagnosis became a technique that ensured job security in the emperor’s inner circle as the private physician for the palace and nobles. In order to protect this job security, the technique was only passed down to a son or the most trusted apprentice after the physician.

This would lead to a problem in the 20th century when the imperial system collapsed. Some of the most skilled physicians were no longer highly regarded as China was being taken over by foreign powers, and after China regained independence after World War II the families who maintained their secrets had to flee to Taiwan to avoid subjugation from the Mao Communists.

During my time in China I believe I encountered a physician or two who may have achieved the skill, but in actuality many either didn’t take a pulse at all or did it as it was expected but they didn’t give it much credence.

The acupuncture schools here in the US make many references to pulse diagnosis in our curriculum but I have yet to see someone in the community who has demonstrated mastery. That was until I met Jimmy Chang and Robert Doane.

Jimmy, originally from Taiwan, life changed when he was introduced to a doctor who had a completely different technique when taking pulses and seemed to have a different outlook on treating patients. Jimmy was extremely interested in the unique lineages of pulse reading that had migrated to Taiwan, and he learned everything he could from that doctor.

Jimmy moved to the US and wrote one of the first English language pulse books and made the important stride of correlating different pulses to western diseases and diagnoses. His time working in the hospital in Taiwan allowed him to not only learn the pulse technique but bridge how it translated to the patient’s western medical diagnosis.

Jimmy is semi-retired now, but his student Robert Doane still practices outside of Seattle, Washington. I have been fortunate enough to study with Robert for years.

Uncle Bob has taken pulse diagnosis a step further and linked various findings in the pulse to cardiovascular conditions with extraordinary accuracy. Therefore, he runs the largest private Chinese Medicine clinic in the US.

I am humbled and excited to continue their work by bringing pulse diagnosis to the public and continue the great work of so many physicians before me. If you ever want to experience pulse diagnosis for yourself I do so at the start of every initial consultation, and regularly do events in the Royal Oak, Ferndale, and Berkley area where I read pulses at no charge!